The downtown Riverside canvas that houses our Encore campus gives our students the opportunity to take in their education in a collegiate atmosphere.

Encore’s Riverside campus is an open campus.  This means that students have the eclectic streets of downtown Riverside as their school quad.  They have the opportunity to eat at many of the food establishments located on the pedestrian mall.  This beautiful backdrop gives our students an advantage with opportunities for a full library, art museum, metropolitan museum and special events at the Fox Theater.  Riverside is the City of Arts and Innovation and Encore is located within Riverside’s Arts Block.

Encore has a ten-minute block between classes so students can walk on the approved paths within the 3/10 mile span between buildings.  There are five buildings that currently make up the Riverside campus. This building serves as the main office on the third floor.

The first floor serves as the school’s student union.

Historically, this building was built in 1911 an was the site of Riverside First National Bank. — Designed by architects John Parkinson (L.A. City Hall) and George Edwin Bergstrom (The Pentagon), the 4-story Italianate-styled bank building includes recessed windows and an elaborate cornice with decorative brackets and deep overhang. A 1958 remodel by Welton-Beckett for Security (Pacific) First National Bank added marble and Byzantine tile designs on the lower exterior. The remodel also added a thin sign marquee and projecting slab hoods over the entrances. The second floor of this historic building will serve as ten classrooms for junior high academic classes once construction is completed.

Historically this building was built in 1903 — Designed by the Los Angeles firm of Burnham & Bliesner, the Italianate-styled building was named for President Theodore Roosevelt, who visited Riverside in 1903. The front façade is topped by an arcaded corbel cornice with decorative shell and flower designs. Eight windows on the second level and a continuous rectangular window with arched wooden dividers unify the building’s storefronts. 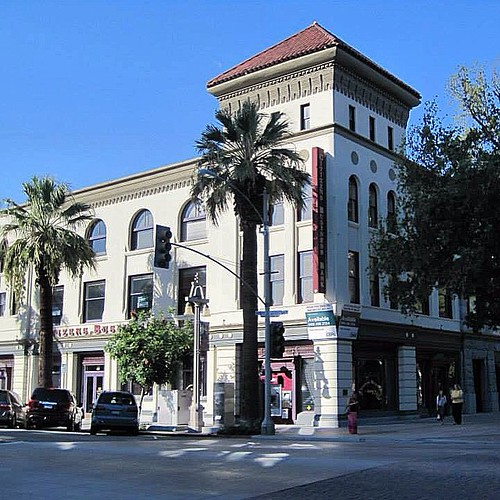 Encore uses a second floor in this building for three separate classrooms.

Historically, this building was built in 1890 — Designed by A.C. Willard and built by wealthy winter resident Charles Loring, the building is likely the oldest structure remaining on Main Street. It once served as Riverside’s first city hall, library, courts and even had a small jail. Originally designed in the Richardsonian Romanesque style, it was remodeled in 1918 by Riverside architect G. Stanley Wilson to better reflect the Mission Revival style of nearby buildings (particularly the Mission Inn). Inside, the building still contains an ornate “birdcage” elevator. For nearly 100 years, the city’s famed Loring Opera House (a.k.a. Golden State Theater) stood on Mission Inn Avenue adjacent to the Loring before being destroyed by fire in 1990 (and is now a small parking lot).

Click the links here to find out information regarding the Encore Riverside Campus.

Riverside campus kids feel safe on campus.
This survey was conducted at the end of the school year in 18/19.

About 1/2 of Encore’s students (both campuses) have a declared conservatory.

Within the entire Encore Education Corporation organization, the following distribution of declared conservatory students were identified.

19% of the declared students are in the DANCE ARTS CONSERVATORY.

17% of the declared students are in the INSTRUMENTAL MUSIC CONSERVATORY.

13% of the declared students are in the VISUAL ARTS CONSERVATORY.

12% of the declared students are in the TECHNICAL ARTS CONSERVATORY.

11% of the declared students are in the VOCAL MUSIC CONSERVATORY.

11% of the declared students are in the CAREER ARTS CONSERVATORY.

9% of the declared students are in the CIRCQUE ACROBATICS CONSERVATORY.

8% of the declared students are in the THEATRE ARTS CONSERVATORY.

About half of the students that attend Encore are beginners and not declared in a conservatory.

Encore Riverside’s campus is a unique commuter campus for the students.  Much like a regional college, Encore Riverside hosts students from 61 different districts throughout the Inland Empire.  While this does pose some challenges with Chronic Absenteeism, Encore offers limited bus routes to the outlying areas to help students transport into the school for their experiences.  Busing is free, offered to students that maintain good citizenship and attendance of 90% or higher on the campus.  To find out about busing in your area, click on the Riverside transportation button on this page.

Scroll Up Scroll Up